Many popular destinations and important services in the Nysse area are along public transport routes. Most destinations can be found by keyword in the Journey Planner.

Are you on your way to these destinations? 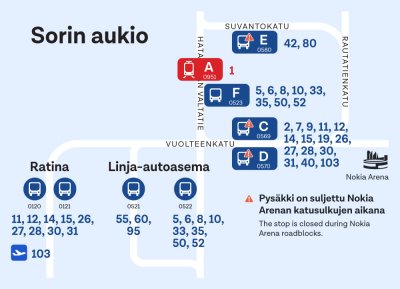 Nokia Arena is located in the center of Tampere, between Ratina and the city centre campus of Tampere university. The arena is a short walk from the bus and train stations as well as Sorin aukio and Ratina stops.

More information about the detours ›

Several public transport buses operate near to Särkänniemi throughout the year. The walk from the Paasikivenkatu stops to the amusement park is about 300 m.

Find the best connections for your trip in the Journey Planner.

Tampere Exhibition and Sports Center is located 6 km from the center of Tampere, near the Pirkkala border. You can easily reach the exhibitions and events by Nysse services.

Bus 12 runs to the exhibition center daily from Tampere and Pirkkala. Buses 101 and 102 are in service during major events. Schedules can be found in the journey planner guide at the time of the events.

The bus line 103 runs daily between Tampere-Pirkkala Airport and Tampere. The route passes through the train station and bus station in the city center. The bus line to Airport is fast, the journey from Tampere takes about 30 minutes.

The bus 103 serves all flights

The line 103 has connections for both departing and arriving flights. The bus is at the airport about an hour before the departure of the flight and the bus is waiting for passengers arriving at the flight. If the flight is delayed, the bus will wait for passengers within the limits allowed by the bus schedules.

Bus 103 stops and picks up passengers in front of terminals 1 and 2 at Tampere-Pirkkala Airport. Line schedules are subject to change due to changes in flight schedules.

Line 103 schedules in the Journey Planner