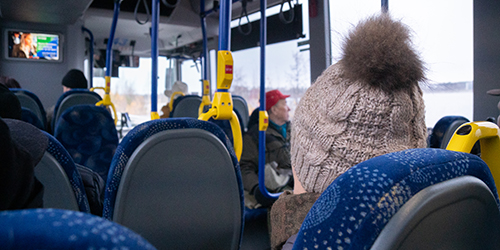 Possible power cuts caused by the shortage of electricity in the coming winter may also affect Nysse’s operations. However, the aim is to target the power cuts so that they cause the least amount of disruption to the functioning of society, and power cuts will be mainly targeted at households.

Rail transport has been designated as a critical electricity consumer by government decree. This means that the transmission system operator will also strive to ensure electricity supply to rail transport during rolling blackouts. Short power cuts will not prevent buses from operating. However, traffic disruptions may occur if traffic lights and street lights do not work.

Buses will operate during short power cuts. Electric buses will also operate, as a power cut of a few hours will not affect the charging of electric buses’ batteries.

During short power cuts, the aim is to secure the electricity supply of trams. However, trams may slow down or operate only on part of the route, as a power cut may, for example, affect traffic lights and the operation of turnouts locally.

The functioning of the Nysse.fi website and e-services is secured in the back-end systems, which means that they will work during short power cuts. However, disruptions may still occur.

During a short power cut, there may be disruptions in the ticketing and payment system, but they are unlikely.

Nysse’s customer service may have to be closed during, for example, a regional power cut. If connections do not work, the telephone service will also be closed.

What should I do during a power cut in public transport?

If there are disruptions, it is always important to follow the instructions of both the transport personnel and the authorities.

Follow Nysse’s disruption communications: the messages are displayed on the Nysse.fi home page, in the journey planner, in the Nysse.fi timetable service, on the @Nysseinfo page on Twitter and on the screens on buses, trams and at bus/tram stops.