A 30-day season ticket with a student discount is available from Nysse Mobiili. The season ticket, which has an unlimited number of trips, is valid for selected zones on buses, trams as well as trains.

The ticket can be purchased by full-time students who are 17 and over. Night fares, upper age limits or home municipality restrictions are not applied. Your information will be checked from the Finnish National Agency for Education’s Studyinfo service in Nysse Mobiili or its admin page. The discount price is valid throughout your studies.

The zones of a Value Ticket can be changed in the Nella online service when purchasing a new ticket. The loading points and customer service can change the zones without purchases.

If your travel card has a pending season ticket with alternative zones, the ticket will start if you travel on the differ zones from the current one.

If you need to change the zones for just one trip, you can do that shen you show your travel card to the card reader:

Yes, if there is room for it. Enter the bus with your bicycle through the middle doors and place it in the open space in the middle of the bus. We do not recommend bringing a bicycle during rush hours (e.g. commute hours and school journeys).

In addition to your own fare, pay a fee in line with your age group for the bicycle by using a Value Ticket or cash. You can bring a folding bike free of charge if you carry it folded. From midnight to 4.40 a.m., a night fare will be charged for both the passenger and the bicycle.

Example 1 » A student travels across 2 zones carrying a bicycle. She pays for her trip using a  Value Ticket by scanning her Nysse Card twice with the card reader. The first charge is the student price, i.e. EUR 1.36. The second charge is the adult price of EUR 1.88 as the bicycle is not covered by the student discount.

Example 3 » A passenger travels across 3 zones carrying a bicycle. He pays for his trip using a Season Ticket. There is no value left on the Value Ticket, so he pays a fee in line with his age group for the bicycle in cash.

No you can't. The mobile ticket starts at the time of the ticket purchase, so you should buy it right before the trip, before boarding.

Remember to show the Qr code of the mobile ticket to the reader (on the bottom of the ticket device ) each time you travel. This is the way to confirm your right to travel with Nysse.

Yes, if you travel within the Nysse zones. Select the required zones for your value ticket when you buy the ticket, as the ticket zones cannot be changed with the station platform ticket device. Ticket zones can be changed at the point of sale even without buying a ticket.

Train journeys in the Nysse zones ›

You can change some of your information in Nella.fi online service. Open Profile from the menu. The first page that opens is where you can change the e-mail address and password of your user account.

Yes you can. With the value loaded on the travel card You can pay

The value purchased in the Nella.fi webstore is available within 2 hours of purchase. The value loaded at the point of sale is available immediately.

No you cannot. You need one ticket for one trip. If the zones of your season ticket do not cover the whole trip, you can buy a Single Ticket using contactless payment or Nysse Mobiili app. You can also pay the single trip with value ticket loaded on your travel card: 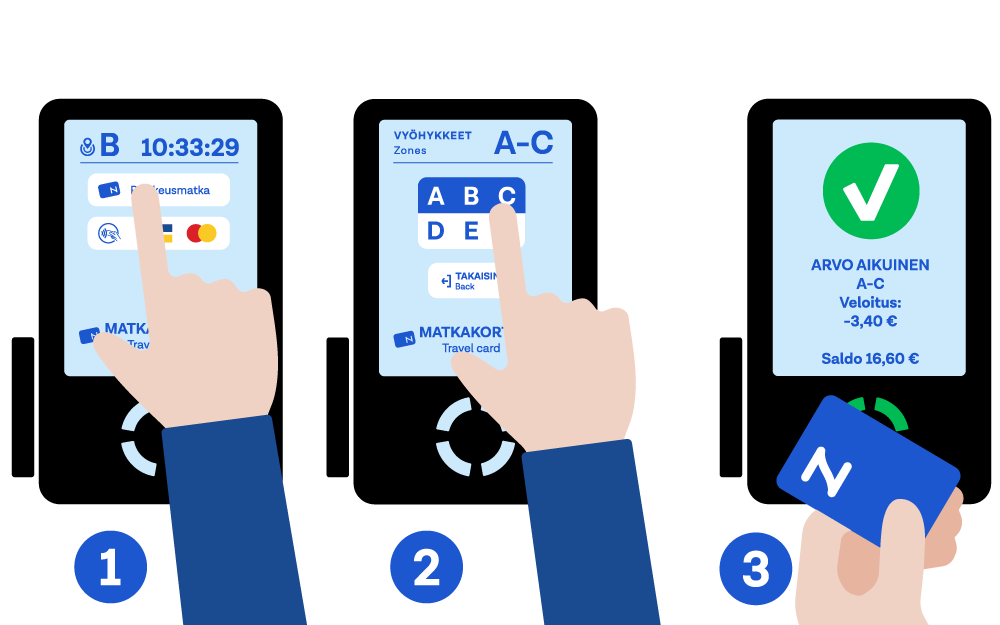 No, you cannot. You can buy tickets for your travel card in the Nella.fi online service, in customer service or from travel card distributors.

However, you can use the contactless payment to pay your single trip on Nysse buses and trams.

Show more
Back up