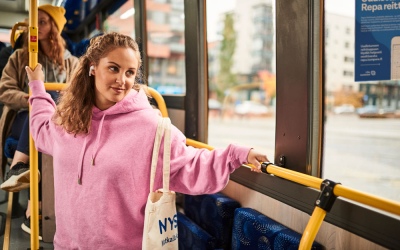 Season ticket is the best choice for an active passenger. You can travel by bus, tram or train in the zones of your choice. The number of trips is not limited.

A 30 day ticket for students is available only at Nysse Mobiili app.

The night fare will be removed from the season ticket

From the beginning of February 2022, the night fare will not be charged with any kind of season ticket.

Select zones for your ticket

Nysse service area is divided into 6 payment zones A, B, C, D, E and F. The heart of the area is in zones A and B in Tampere. Other zones surround the center of the area.

Always select at least 2 adjacent zones for your ticket, even if your trip is in only one zone. The prize of your ticket is based on to the number of the selected zones.

Confirm the validity of your ticket each time you travel

Always confirm the validy of your ticket when you get on a bus, tram or train. An inspection fee of 80 euros can be charged for a passenger without a confirmed ticket or a right to travel.

In the bus and tram, the device can be found near to the entrance. On train journeys, the device is at the station platform, so confirm your ticket before boarding.

The night fare will not be charged for season tickets from the beginning of February 2022.

Children aged 0-6 are allowed to travel free of charge with an older traveler.